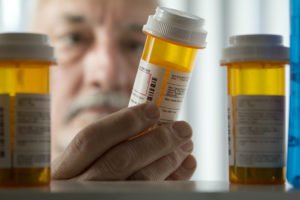 When most people think of drug abuse and addiction, they probably think of those who abuse illegal drugs like heroin or cocaine, but people can also become addicted to prescription drugs. When someone becomes addicted, the body becomes dependent upon the drugs, and a person will therefore withdraw if he or she stops taking the drug. This can result in uncomfortable symptoms as the body detoxes.

People may abuse various types of prescription drugs. According to the National Institute on Drug Abuse (NIDA), the most addictive prescription drugs include depressants like benzodiazepines, opioid medications used to treat pain, and stimulant drugs that treat ADHD.

People may abuse prescription medications by taking higher doses than a doctor prescribes, obtaining pills from multiple doctors, taking a prescription that belongs to a friend or relative, or buying medications illegally from street-level drug dealers. Regardless of the method of abuse, when people misuse prescription drugs like opioids, stimulants, or benzodiazepines, they may become addicted and develop a withdrawal syndrome when they stop using these drugs.

The Diagnostic and Statistical Manual of Mental Disorders (Fifth Ed.) provides a list of symptoms of substance use disorders, which is the clinical term that professionals use to name drug abuse or drug addiction.

Signs of Substance Use Disorder

Someone who displays several of the above symptoms in reference to prescription drug may have an addiction. Given these symptoms, a person who has become addicted to a prescription opiate, stimulant, or benzodiazepine drug may take one of these medications in larger doses than prescribed or may spend a significant amount of time stealing money to obtain more drugs, or going from doctor to doctor or pharmacy to pharmacy to attempt to get larger quantities (also known as “doctor shopping”).

Another example that may indicate addiction is a person taking a large dose of opiates before going to work at a job using heavy machinery, which would be dangerous.

A person who has become addicted to benzodiazepines, for instance, may start showing up to work late and missing important deadlines or might give up hobbies, such as going to the gym or playing on a sports team. In addition, a person may know that he or she is experiencing high blood pressure or chest palpitations as a result of stimulant abuse, but continue to use because of an addiction. Someone who is addicted to prescription drugs may also have arguments with a spouse or significant other regarding drug use.

It is noted that while withdrawal symptoms are one of the diagnostic criterion for a substance use disorder, this does not apply when someone is taking a prescription medication under the care of a doctor. If a person were taking an opiate medication exactly as prescribed for cancer related pain, for instance, experiencing withdrawal symptoms would not be indicative of addiction.

On the other hand, if someone who is buying opiate pills on the streets shows withdrawal symptoms when he or she cannot get the usual dose of the drug, this would be a symptom of an addiction.

Beyond specific diagnostic criteria, it is also important to consider signs that a person is abusing prescription medications rather than taking the drugs exactly as prescribed. For example, someone who is abusing stimulants may be dissolving the drugs and injecting them instead of taking the medication orally in pill form.

Finding needles or other drug paraphernalia around the home would therefore be a sign of abuse. Some people may also crush and snort prescription drugs to abuse them, so straws or powder residue could indicate addiction. It is also reasonable to suspect prescription drug addiction if someone seems to be using up a prescription quickly or going to the pharmacy frequently for more medication.

Each of the types of prescription drugs noted herein has different effects on the body, so the withdrawal symptoms will vary from drug to drug.

When people become addicted to prescription opiates like oxycodone, hydrocodone, or morphine, they are likely to experience a specific opiate withdrawal syndrome if they stop using these drugs. According to NIDA, prescription opiate withdrawal symptoms include sleep disturbances, pain in the muscles and bones, cold sweats, goose bumps, intense drug cravings, uncontrolled limb movements, diarrhea, and vomiting.

Per the World Health Organization, when a person has been using a long-acting opiate like Methadone, withdrawal symptoms appear 12 to 48 hours after a person stops using, and they can persist for 10 to 20 days. With shorter-acting opiates like oxycodone, withdrawal begins after 8 to 24 hours and lasts for a shorter period of about 4 to 10 days.

When a person withdraws from benzodiazepines, he or she may experience a variety of uncomfortable side effects. According to a report from Harvard Medical School, these side effects include irritable mood, feelings of restlessness, tight muscles, feelings of weakness, pain and achiness, blurry vision, and elevated heart rate.

Specific withdrawal symptoms tend to appear when a person who has become addicted to prescription drugs stops using these medications. These symptoms occur because the body adapts to having drugs present and relies upon these drugs to have specific effects. When the drugs are absent, the body is not able to function normally without them, and uncomfortable side effects occur. For example, benzodiazepine prescription drugs work by increasing the activity of a brain chemical or neurotransmitter called GABA.

This neurotransmitter slows the activity of the nervous system, which has a calming effect; however, if a person has become addicted to benzodiazepines, the body will be unable to maintain GABA activity on its own. This means that when a person stops using these drugs, the nervous system becomes overactive, resulting in common benzodiazepine withdrawal symptoms like restlessness and fast heart rate.

In addition, data showed that 2 million people abused prescription pain pills for the first time in 2017, and over one million began abusing stimulants. Furthermore, 271,000 people abused sedative drugs like benzodiazepines for the first time in 2017. Those who begin abusing these medications are at risk of developing a substance use disorder and showing signs of prescription drug withdrawal if they attempt to stop using them.

Addiction treatment centers offer detox programs that can treat the symptoms of withdrawal and reduce the risk of serious complications.

Whether a person detoxes in an outpatient setting or an inpatient setting like a hospital will depend on his or her unique situation. Regardless of where detox occurs, it is important to always contact a medical professional before detoxing from prescription drugs. Some people may have milder withdrawal symptoms that allow them to detox from home while taking medications and checking in with a treatment provider regularly, whereas others  may experience severe prescription drug withdrawal and require treatment in a hospital setting, where staff can provide around-the-clock monitoring.

While prescription drug detox can occur in either an inpatient or outpatient setting, the treatment protocol will depend upon the type of prescription drug a person was abusing. For those who have become addicted to prescription opiates, for example, detox programs can provide medications to reduce drug cravings and alleviate some withdrawal symptoms.

Some people may take medications like methadone or buprenorphine, which are routinely used to treat opiate withdrawal and addiction. Others may benefit from taking clonidine to control withdrawal symptoms like sweating, sleep problems, and gastrointestinal symptoms. In addition to these medications, the Food and Drug Administration approved a drug called lofexidine in 2018, and some people may take this drug to decrease opiate withdrawal symptoms during detox.

Detox from prescription stimulants is tailored to address the specific withdrawal symptoms a person experiences. For instance, a person may be given medication to address anxiety or pain. Some people may become severely agitated when withdrawing from these prescription drugs, and it may be necessary to treat them in a hospital setting where they can receive appropriate psychiatric care.

For those detoxing from benzodiazepines, it can be dangerous to abruptly stop using the medication. According to the World Health Organization, the safest way to detox from benzodiazepines is to gradually reduce a person’s doses of the drugs. Regardless of what type of benzodiazepine a person was abusing, the recommended course of action is to stabilize the patient on a maximum dose of 40 mg of Valium a day, and then reduce the dose slowly as a person detoxes. For patients who have begun detoxing on their own, it may be necessary to address and treat complications, such as seizures.

While the specific treatment protocol for prescription drug detox can vary between different types of drugs, it is necessary to seek professional help when detoxing from any prescription drug. Without the care and supervision of medical staff, it is possible to experience serious side effects, including death. The risk of fatal withdrawal symptoms may be rare, but even in cases of mild withdrawal, it is helpful to have the advice of a doctor or addiction specialist.

Detox programs are necessary to help people manage the side effects of withdrawal, but this is only the first step in treatment for prescription drug addiction. Getting through the uncomfortable symptoms of prescription drug withdrawal may clear the body of drugs, but it does not address the underlying issues that lead to addiction. Following a detox program, it is necessary to receive ongoing addiction treatment, which usually involves a combination of individual and group counseling.

Through counseling, people who have become addicted to prescription drugs can learn new ways of coping and develop methods for identify and resisting relapse triggers. They can also develop a support group and learn from others who are also undergoing treatment for addiction. Depending upon the severity of a person’s addiction, ongoing treatment may occur on either an inpatient or outpatient basis. Staff working in prescription drug detox programs can help patients to determine the best level of care.

Various forms of therapy may be useful for those in treatment for prescription drug addiction. For instance, cognitive behavioral therapy can help people to change their thoughts and feelings about drugs in order to remain abstinent and better cope with stress. Contingency management programs, which offer people rewards for remaining sober, can also be beneficial.

Regardless of the specific type of therapy, it is important that behavioral interventions be incorporated into treatment, as they address the psychological issues underlying addiction. Some people may take medications in addition to receiving therapy. For instance, those in treatment for prescription opiate addiction may take buprenorphine over the long-term to help them remain sober, since it reduces drug cravings.

Research has supported the use of cognitive behavioral therapy among people who are in treatment for prescription opiate addiction. For example, a 2016 study in the Journal of Substance Abuse Treatment found that people who received this form of therapy in combination with medication were more likely to remain abstinent from prescription opiates when compared to those who took medication only.

While effective treatments are available for prescription drug addiction, it is best to prevent addiction from developing, whenever possible. To do so, it is important that people avoid taking medications that are not prescribed to them. It may seem harmless to borrow pills from a friend or relative, but taking medication without the advice of a doctor can be dangerous.

A dose of a medication that is appropriate for one person may be excessive for another, and therefore lead to abuse and addiction. It is also vital that people take medications exactly as prescribed by a doctor. It is never safe to take larger doses than prescribed or to get prescriptions from multiple doctors in order to have more medication available. Lastly, prescription medications should never be purchased illegally from street drug dealers. Despite having legitimate medical uses, these drugs can be dangerous when used illegally.