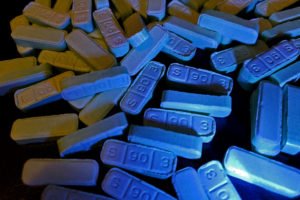 Xanax, or alprazolam, is one of the most commonly prescribed drugs in the U.S. market. It belongs to the benzodiazepine class (“BZDs”, or “benzos”), which were synthesized in the late 1950s in an effort to replace barbiturates as a medication for anxiety and sedation. These drugs rapidly flooded the market from the 60s-2000s, before side effects such as high addictive potential and slow breathing rate became more well known and categorized. Xanax itself is the most prescribed psychiatric medication in the U.S., with 25 million total prescriptions in 2017.

Is Xanax a Prescription Drug?

All benzodiazepines carry a schedule IV classification, which means they harbor addictive potential. Because of this, it requires a prescription to obtain legally. As more information has emerged about these drugs, doctors have become increasingly careful about prescribing them, meaning that they often will not use them as a first-line answer for anxiety. When used, doctors are now only prescribing for less than 2 weeks.

Like all benzodiazepines, Xanax exerts its effects by calming the anxiety circuits in the brain. It acts on the same receptor, actually, that alcohol does to relieve anxiety. Xanax, when compared to other benzos, has a middle of the road half-life, meaning it acts for about 6 hours once it starts.  In most users, aside from those who use the drug very heavily, it can be picked up in a drug urine sample screen for about 4 days. Benzos also have activity in the spinal cord, which act to relax muscles. So globally, these drugs have a two-fold effect: they exert a calming effect over the body by making your brain relax and decrease its defensive signaling, and by physically relaxing your muscles to create a more relaxed posture.

The Side Effects of Xanax

Side effects of Xanax that are most commonly experienced are dizziness, drowsiness, and a change in energy level. These are common, and typically go alongside the intended effects of the drug. Some of the more serious side effects, such as disorientation, and sharp mood changes, require a phone call to your prescribing physician, as they may not be working the way that they should.

Because Xanax and alcohol act at the same sites in the brain, they exhibit what is called a “synergistic effect”. This means that, instead of competing for sites, they work together to create a stronger effect than either one of them can alone. Additionally, alcohol can increase the amount of Xanax in the blood. The resulting effects can be depression, memory impairment, and loss of consciousness. There can also be blurred vision and nausea. The amount of depressive effects together can even cause someone to blackout and lose consciousness. If someone combining alcohol and Xanax, which is not recommended, and becomes difficult to arouse, the best move is to find an urgent care or emergency room to take them to. It is far and away better, however, to avoid interacting these two compounds together. If you end up in fact being prescribed Xanax, it avoiding alcohol is the only way to ensure that there is no unsafe interaction.

Is Xanax an Opioid?

Benzodiazepines and opioids are fairly difficult to tell apart, since they accomplish much of the same things. However, the manner in which they go about accomplishing these is very different. Opioids act on the pain/sedation pathway, while benzos act on the anxiety/sedation pathway. The overlap accounts for the similarities of intoxication: when a person takes either drunk, they can appear drunk, their breathing can become shallow, and their heart rate can slow down. However, benzos cannot treat pain, so a person will still experience pain while on them, and opioids will not treat anxiety, other than sedating the person to the point to where they cannot be conscious enough to be anxious.

The benzodiazepines are considered the safest of drugs used for sedation. Unfortunately, none of these drugs are safe. There are cases of dangerous overdose on these drugs, and especially when they are combined with alcohol or opiates, which they often are, the result can be lethal. Additionally, withdrawal from benzos is one of the worst withdrawals in medicine. The body craves these drugs so quickly, and acclimates to their presence so acutely, that Xanax withdrawal can cause convulsions and seizure with as little as 6 weeks of use. This withdrawal can also be deadly, and if present, needs to be done by medical professionals.

Finally, the most dangerous side effect of Xanax is how addictive it is. It takes an extraordinarily short amount of time for the brain to start craving these drugs enough to actively seek them out, because they relieve the anxiety that someone would drive someone to desperately seek relief. It is the root cause of why they end up being abused, and should only be used if necessary, administrated by a medical professional.