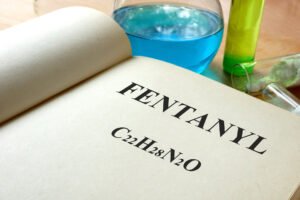 Fentanyl is a narcotic substance prescribed to treat severe pain. The synthetic opioid is very powerful. When prescribed for chronic pain, fentanyl can be administered as a shot, a transdermal patch, or a cough drop-like lozenge. However, fentanyl is also manufactured illegally. Illegal doses can lead to overdose, permanent health damage, and even death.

For pharmaceutical usage, fentanyl was created to help cancer patients with pain management. As a street drug, fentanyl is often combined with heroin to increase its potency. In some cases, people may think they are purchasing heroin when they are actually purchasing fentanyl. Keep reading to learn more about fentanyl, including how it affects your body.

What kind of drug is fentanyl?

Fentanyl is a Schedule II controlled substance. Substances in the Schedule II drug class are highly regulated by the DEA because of their high potential for abuse. Abuse of fentanyl can lead to dependence, both psychological and physical.

Drugs classified as Schedule II substances may be considered viable for certain medical purposes, despite their high potential for abuse. If closely monitored by a doctor, fentanyl can be used to treat chronic pain, but there are risks associated with long-term usage.

What does fentanyl do?

Fentanyl produces similar reactions to other opioid analgesics. Using the drug can cause a wide range of effects, including:

The effects of fentanyl are short-term, and the high produced by the drug does not last long. While the user may experience a euphoric state, the feelings are temporary. The drug also slows respiration, which can reduce blood pressure.

Fentanyl can block pain because it works in the brain. This effect is the most common usage for fentanyl by medical professionals. If administered intravenously, fentanyl can also be used as surgical analgesia and anesthesia.

What is fentanyl used for?

Fentanyl is a highly potent and potentially dangerous substance due to the possibility of addiction or abuse. However, fentanyl is prescribed by doctors in some circumstances. The most common medical use for fentanyl is pain management. Breakthrough pain, which can occur even if a patient is receiving constant doses of pain medication, can be treated by fentanyl in patients over the age of 18.

Fentanyl is also prescribed for pain management for cancer patients. Because the drug alters how the brain and nervous system react to pain, it can reduce pain related to cancer and cancer treatments. A doctor typically begins with a low dose of fentanyl, which is gradually increased as needed. It is crucial that patients take fentanyl exactly as directed by their doctor, and contact their doctor if they experience severe side effects.

What is fentanyl made of?

Opiate alkaloids can occur naturally in some plants. These materials used to be included in the production of opium and can have pain-relieving properties. When pharmaceutical opioid drugs are manufactured, these alkaloid substances can be used as building blocks. Fentanyl is a fully synthetic opioid. It is not naturally occurring and is developed in a lab.

The delivery of the drug can also impact the ingredients. Substances like ethanol may be added to transdermal patches to make the rate of absorption faster. Brand names for fentanyl include:

How long does fentanyl stay in your system?

Detection time for fentanyl is impacted by a few different factors. Larger doses can take longer to be eliminated. The metabolism of fentanyl can be slower if someone’s renal or liver functions are impaired. Also, if someone is using a fentanyl patch, the location of the patch can impact the rate of absorption.

In some cases, Fentanyl can leave you system within 11 to 22 hours. Factors that impact how long fentanyl stays in your system include:

How long does fentanyl stay in your urine?

Urine tests are the most common drug tests used by employers. Fentanyl can show up on a urine test for one to three days after the last use. In some cases, Benadryl can produce a false positive test for fentanyl. If you are being tested for opiates, let the testing agency know if you have taken Benadryl recently. You should also let them know if fentanyl has been prescribed for you. Disclosing this information up front is always best for drug tests.

Is fentanyl an opioid?

Fentanyl is a synthetic opioid belonging to the opioid drug class. When prescribed by a doctor, opioids can be safe pain killers for a short period of time. However, they have a high potential for abuse. The effects of pain relief and the sense of euphoria can cause the drug to be misused. Opioids can lead to dependence, addiction, overdose, or even death.

Fentanyl is available in a variety of forms, so the appearance can change. The drug comes in pill, powder, or blotter paper form. It can also be manufactured as a tablet, spray or film that goes under the tongue. As a street drug, fentanyl is typically sold as a powder that looks similar to heroin. For pain management, fentanyl is often prescribed as a gel patch, lollipop, lozenge, or injectable.

How much fentanyl is lethal?

For most people, only three milligrams of fentanyl can be lethal. When compared to other substances, fentanyl is lethal in much smaller doses. For example, a lethal dose of heroin is about 30 milligrams.

Is fentanyl stronger than morphine?

Is fentanyl stronger than Dilaudid?

Like Fentanyl, Dilaudid is an opioid analgesic that can be used to treat severe pain. Both substances may be used for pain management for cancer patients. Dilaudid can be used through an IV or orally, and the doses differ by how the drug is administered. Under medical supervision, Dilaudid is typically prescribed as 2 to 4mg tablets or 1 to 2mg injections.

Fentanyl is extremely potent. As a synthetic opioid that can relieve pain and cause a state of euphoria, fentanyl is at a high risk for addiction. Unprescribed levels of fentanyl can cause a short-lived high. Fentanyl is also often mixed with illicit narcotics, which cause serious side effects. Recreational abuse of fentanyl is sometimes combined with heroin or cocaine to amplify the effects of the drugs.

Abuse of fentanyl can quickly lead to addiction. As someone’s tolerance for the drug increases, it takes higher doses to feel the same high. Higher doses of fentanyl may also be needed to help the person feel a sense of normalcy. The drug impacts the body’s central nervous system, leading to a flood of dopamine. Over time, the use of fentanyl can alter the brain and cause neurochemical changes.

What are the side effects of fentanyl?

Fentanyl use and abuse can lead to a variety of damaging side effects. You might be able to recognize fentanyl abuse by the following symptoms.