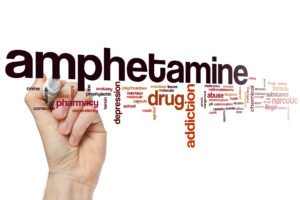 Crystal methamphetamine, also known as crystal meth, is a highly addictive stimulant in the form of a crystalline clear/white powder that is consumed by snorting, smoking, or injecting. Methamphetamine (meth-am-fet-uh-meen) can be prescribed in very low doses, but is rarely administered due to its addictive nature. Crystal meth on the other hand, is illegal and sold on the streets.

Meth causes dopamine to flood the brain and create feelings of euphoria and increased energy. This sensation, called a “rush,” also creates a false sense of well-being coupled with increased confidence, pleasure and hyperactivity.

While most other drugs are taken solely for recreational use, or a “high”, meth is also abused “functionally.” Functional use includes ingestion of meth to stay awake for long periods of time, to focus and complete certain tasks, including work and school obligations, or as a drug to lose weight.

Meth is known by numerous names, depending on the user group and region. Being educated on the names of this drug and activity, can help you identify if someone near you is abusing meth or if someone has introduced you to meth unknowingly.

Some of the most common nicknames for the drug in general include speed, crank, gak, tweak, uppers, cookies, cotton candy, chalk, rocket fuel and Tina. When meth is mixed with other drugs, such as cocaine or ecstasy, it is often referred to as twister, party & play, hugs & kisses, fire, and shabu.

More importantly are the terms to describe meth use. If you overhear one of these terms, or happen to see them mentioned in a text message, please be on alert. More than likely, the users are referring to engaging in meth usage or some other form of drug use.

Terms that are used to describe getting high off of meth

In addition to being aware of the terminology used to describe meth usage, it is also helpful to be familiar with signs of meth use and addiction. Typically, meth abusers display two or more of the following symptoms.

Other signs include hot flashes, vision problems, headaches, memory loss, psychotic behavior, agitation and aggression. It is often easy to confuse meth symptoms with personality or psychiatric disorders. As mental illness can be a precursor to the use of illegal drugs, it is important to get yourself or your loved one help as soon as you notice these signs.

Amphetamine has a long history dating back to the 1800’s where it was first produced in Germany. Soon after, Japan produced a much stronger version called methamphetamine, which was widely used by soldiers for its energy-causing abilities during World War II. After the war ended, there were surplus amounts on hand, which led to an increase in abuse. Over in the US, doctors began prescribing meth for depression and weight loss. The demand for illegal meth usage increased and so did the illegal production of the drug.

Amphetamine and methamphetamine do have very similar chemical make-ups, but methamphetamine is more potent, more dangerous, and more addictive than the former. Both drugs are stimulants which speed up the heart rate, metabolism, and increase body temperature.

Both drugs lead to feelings of pleasure and increased energy. However, meth has a key structural difference that makes it much more dangerous than amphetamines. It goes into the brain much faster which can cause far worse affects on the structure and chemistry in the brain, and it remains in the body much longer. Also, side effects of meth use differ from amphetamines. These include short-term effects—increased tooth decay, headaches, blurry vision—and long-term side effects—psychosis, skin infections, and permanent brain damage. In addition, crystal meth is produced illegally, usually in home labs, and is often mixed with dangerous substances or other drugs to increase its potency.

As previously mentioned, long-term and consistent use of meth can be detrimental to the body, causing structural changes to the brain and psychological issues. Brain damage is one of the most severe side effects of long-term usage.

Side Effects of Meth Withdrawal

Withdrawal from any drug involves a degree of physical and psychiatric symptoms as the body adjusts to the drug’s absence. It is still critical that detox take place as soon as possible to prevent further bodily and life damage. Some of the symptoms can diminish quickly, while others may last for months. Withdrawal symptoms begin as soon as 24 hours from the last ingestion of the drug. Early symptoms include extreme hunger, headaches, and decreased energy. Some users may also begin to feel anxiety and irritability.

There are two phases of meth withdrawal. The first phase occurs within the first 24 hours and a second phase known as the “subacute” phase, can last for weeks and even months. Withdrawal symptoms differ depending on the amount of meth ingested and the amount of time the drug was used. Other factors that affect withdrawal include the person’s mental and psychological health prior to use, as well as the quality of the meth used.

One common withdrawal symptom that should be expected is the intense cravings for the drug, including a desire to take larger amounts than usual. This makes it even more important to ensure that you are under the supervision of a recovery specialist or doctor, in order to manage these cravings and prevent additional negative reactions.

Meth Abuse Statistics in the US

Meth abusers include social users, functional users, and dependent users who all utilize the drug for different purposes. It is reported that over 1 million people in the US use meth with the average age of first-time users being a little over 23 and the youngest reported age of abusers as young as 12 years old.

It has also been reported that during one year, over 27% of adult abusers used meth over 200 days out of the year, over 52% had a meth use disorder, and over 22% had injected meth in the past year.

Statistics reveal that meth use is higher among men and the 26 to 49 age group. In addition, there is increased usage among those with lower educational achievement, household income less than $50,000 per year, and Medicaid recipients or those with no medical insurance. Another factor is location. Higher rates of usage were reported in non-metro and small metro areas. As with most drugs, co-occurring substance abuse and mental illness also increase usage rates.

According to various statistics, meth use by middle schoolers has declined in recent years, while certain states (Washington, Colorado, Texas, Florida, and Georgia) experienced spikes in meth-related overdose deaths across all age groups in 2017.

Highest availability of meth is in the western and Midwestern regions of the US, with more than 70% of local enforcement agencies reporting meth as the highest drug threat for their areas.

Fortunately, there is hope for recovery. While meth recovery is a lifelong journey, there are resources and therapies available to support abusers no matter how deep they are into meth addiction. While detox is one of the first steps in recovery, it is best to seek help from a professional recovery specialist or rehab facility before attempting detox on your own. This will significantly increase your chances of a successful recovery and provide the needed help to manage withdrawal symptoms safely.

Crystal meth is highly addictive and illegal. It wreaks havoc on the body, mind, and an addict’s entire life. Meth addiction ruins relationships and takes a huge toll on an abuser’s finances. While it may begin as a party drug, or as a necessity to get through long days at work or school, it can quickly take control of the mind and create an addiction that lasts for years. Many meth users and their families feel that it is hopeless to break the addiction. However, this is not true. There are many resources available to help you recover both mentally and physically and provide you the support you need for a lifelong journey of recovery.

If you or someone you know struggles with meth addiction in any form, it is critical that you seek help as soon as possible by contacting a local addiction clinic or the Substance Abuse and Mental Health Services Administration (SAMHSA) National Helpline at 1-800-662-4357.

How addictive is meth?

Meth is extremely addictive, one of the most addictive drugs. Users can become dependent after the first use.

What is a functioning meth addict?

A functioning meth addict is someone who uses meth to enable them to perform an activity such as work or school. They differ from social meth addicts because they feel that is a necessity to achieve a productive goal as opposed to using meth just to get high.

How easy is it to get addicted to meth?

It is extremely easy to get addicted to meth. Many people who begin using it quickly develop a tolerance, which leads to dependence and addiction.

Yes. Meth causes structural changes in the brain that create a dependence that requires more and more of the drug to operate at the same level.

Yes, crystal methamphetamine is illegal. You can be arrested for the purchase, sale, and possession of the drug, even in small quantities.

How long does meth withdrawal last?

Meth withdrawal symptoms last from 24 hours to a few months or more.

What are the symptoms of meth withdrawal?

Is meth a stimulant or a depressant?

Meth is a stimulant. Stimulants increase the amount of dopamine in the body beyond what would normally be produced. This causes increased alertness, energy and pleasure sensations.

Is meth a hallucinogen?

While meth may cause some psychosis after prolonged use or in high doses, the drug is generally not classified as a hallucinogen by national drug administrations.