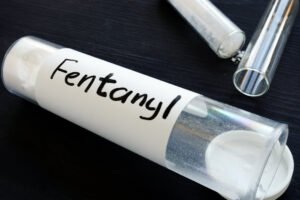 Fentanyl is an extremely potent drug, used as both a prescription medication and an illegal substance. With opioid addiction rates and overdose deaths on the rise, it is important to understand the effects and consequences of fentanyl. Keep reading to learn more about fentanyl addiction, including symptoms and treatment options.

In terms of potency, fentanyl is 50 to 100 times more potent than morphine. As a Schedule II drug, fentanyl is approved for medical use in certain circumstances. However, it is also at a high risk for abuse. Sometimes, fentanyl is added to heroin in order to increase the drug’s potency. People may think they are purchasing highly potent heroin, but they are actually purchasing fentanyl.

What is fentanyl used for?

The most common use for fentanyl when prescribed by a doctor is to treat severe pain. Fentanyl is an opioid analgesics and can provide pain relief and pain management. Patients who have undergone a recent surgery, suffer from chronic pain, or have pain related to cancer may be prescribed fentanyl.

Fentanyl may be taken illegally or abused in order to achieve the effects produced by the drug. Someone who takes fentanyl may experience an intense high that lasts for a short period of time. Feelings of euphoria are also common with fentanyl usage. Individuals may be seeking the relaxation, pain relief, and euphoria that come from taking fentanyl.

How is fentanyl taken?

When a doctor prescribes fentanyl for pain relief, they are very specific on how the drug should be used. Patients should follow the doctor’s instructions exactly and contact their doctor if they experience any negative side effects from fentanyl. As a prescription drug, fentanyl can be given as a shot. It may also be prescribed as a patch that goes on the skin or a lozenge, similar to a cough drop.

Synthetic fentanyl is also manufactured and sold illegally. Made in labs, the drug can be made in powder form which is dropped on blotter paper or used in eye droppers or nasal sprays. In some cases, fentanyl can be made into pills that closely resemble other opioids.

Fentanyl is also commonly mixed with other illegal substances. The high potency of fentanyl means that very little of the drug is needed to achieve a high. Drug dealers may combine fentanyl with heroin, cocaine, meth, and MDMA as a cheap way to increase the drugs’ potency.

Street fentanyl is commonly produced as a powder that is white or off-white. Users may swallow or smoke the powder. It can also be injected or snorted. Individuals who purchase fentanyl illegally may not ever see it in powder form, though. Fentanyl is often hidden in other illegal substances.

Illegal fentanyl may also be sold in a pill form that resembles a prescription opioid. When pressed into tablets, fentanyl may be passed off as a counterfeit pharmaceutical, including OxyContin. Individuals may not realize they are taking fentanyl, which is more potent than many other illegal substances or prescription opioids.

When prescribed by a doctor, there are multiple pharmaceutical preparations for the drug. It can be delivered as a fentanyl patch on the skin, an injection suspension, a spray that goes under the tongue or in the nose, or an oral dissolving tablet.

Fentanyl and heroin are two different drugs, both opioids. However, individuals may believe they are purchasing heroin but receive fentanyl instead. Fentanyl has a high potency, so less of the drug is required to achieve a high. Drug dealers and illegal drug manufacturers sometimes mix fentanyl and heroin to increase the potency of the drug.

Is fentanyl an opioid?

Fentanyl is an opioid. The drug interacts with the opioid receptors in the brain. When prescribed by a doctor and taken for a short period of time, opioids can provide pain relief. However, they are also at a high risk for abuse. When misused, opioids use can lead to dependence, addiction, overdose, and even death.

Fentanyl is a very powerful drug with a high risk for dependence or addiction. The potency of fentanyl increases the chance of addiction or developing a substance use disorder. Even when prescribed by a doctor, it is possible for an individual to develop a fentanyl addiction.

Individuals may seek the drug compulsively and have a difficult time controlling their drug use, indicating the presence of a fentanyl addiction. Addiction can lead people to continue using fentanyl despite negative consequences, health problems, and other issues related to drug use. When someone tries to stop taking the drug, they may experience withdrawal symptoms.

How is fentanyl abused?

What kind of high does fentanyl give you?

Fentanyl acts on the opioid receptors in the body. These areas of the brain work to control emotions or pain. The effects of fentanyl can cause an individual to experience extreme happiness, sedation, and euphoria. The drug provides pain relief as well as a short, intense high.

More than 31,000 deaths occurred in 2018 that involved synthetic opioids, like fentanyl. The death rate of synthetic opioids increased by 10% from the year 2017 to 2018. From 2015 to 2016, the number of fentanyl-involved deaths doubled. In recent years, deaths involving fentanyl increased by 540%. The majority of overdose deaths involving fentanyl occur in the eastern United States.

A doctor may prescribe a fentanyl transdermal, skin patch, to treat moderate to severe pain. The fentanyl patch should only be used when prescribed by a doctor, and individuals should follow all instructions on the prescription label and medication guide. Fentanyl is addictive, even in the form of a patch or prescribed by a doctor.

How long does it take to get addicted to fentanyl?

Fentanyl is very potent, about 50 to 100 times stronger than morphine. The timelines for dependence, tolerance, and addiction are different for everyone. However, the tolerance window for opioids, like fentanyl, are short. An individual can develop a tolerance for fentanyl by only taking a small amount of the drug or taking it for a short time period.

Medical supervision can make the detoxification process easier or more comfortable. With the right treatment, withdrawal symptoms can be mitigated and the chance of relapse can be curbed. Fentanyl addiction recovery involves a complete approach, including physical health, mental health, and emotional support. Treatment facilities often recommend support groups and counseling services to help with fentanyl addiction recovery.

Fentanyl is a powerful and potent synthetic opioid drug. When prescribed by a doctor, fentanyl is used to treat moderate to severe pain. However, as a Schedule II drug, fentanyl is at a high risk for abuse, dependence, or addiction. Individuals who take fentanyl may develop a tolerance to the drug, requiring a higher dose to experience the same effects.

The potency of fentanyl can shorten the amount of time it takes to develop a tolerance or addiction in comparison with other drugs. Even individuals who have been prescribed fentanyl by a doctor as an oral tablet, injection, or patch are at risk of developing an addiction.

When someone who has developed a tolerance or dependence on fentanyl stops taking the drug, withdrawal symptoms may occur. Keep reading to learn about fentanyl withdrawal, including common symptoms and treatment options.

Regularly using fentanyl can lead to a severe physical dependence. Fentanyl is about 80 times stronger than morphine and impacts the opioid receptors in the brain. As individuals abuse or misuse fentanyl, either through a prescription or illegally, the brain adjusts to the presence of the drug. When someone stops taking fentanyl, their brain and body must adjust again to the absence of the drug.

Fentanyl withdrawal symptoms can impact a person in many ways. Symptoms of fentanyl withdrawal include physical, mental, and emotional side effects. The withdrawal effects of fentanyl can be powerful, making the drug psychologically addicting as well. Quitting cold turkey or on their own may be difficult for individuals struggling with fentanyl addiction.

Systems in the body are suppressed when fentanyl is used. When they are deprived of fentanyl, the effects lead to withdrawal symptoms. Common symptoms of fentanyl withdrawal include:

A doctor may prescribe a fentanyl skin patch to treat pain that is moderate to severe. It is more commonly prescribed for chronic pain, instead of pain that occurs rarely or after surgery for a short period of time. Even in patch form, fentanyl is considered addictive. Using any narcotic or opioid for an extended period of time can carry a high risk of habit-forming behavior or dependence. When an individual stops using the fentanyl patch, withdrawal symptoms are possible.

To avoid potential fentanyl patch withdrawal symptoms, it is important to follow a doctor’s instructions when taking the drug. The transdermal patch is used as a delivery method for fentanyl for severe pain related to cancer. Fentanyl patch withdrawal symptoms can mimic flu-like symptoms, including nausea, sweating, muscle aches, diarrhea, and agitation.

Can fentanyl withdrawal kill you?

Fentanyl withdrawal symptoms can be severe and even lethal in some cases. While fentanyl withdrawal is not considered life-threatening for the most part, it can be dangerous if mismanaged. It is always best to seek medical treatment and withdrawal from opioids under a doctor’s supervision.

How long does fentanyl withdrawal last?

For some people, symptoms can continue after 10 days. These individuals move from the acute withdrawal phase to experience protracted withdrawal symptoms that can last for several weeks.

Can you experience fentanyl withdrawal after short-term use?

It is difficult to determine how fentanyl withdrawal will impact an individual. The extreme potency of fentanyl can shorten the window for developing a substance use disorder or building up a tolerance for the drug. Individuals who have used fentanyl for a short period of time may still be at risk of experiencing withdrawal symptoms, especially if they took higher doses of the drug.

It may be possible to experience fentanyl withdrawal after short-term use. Even when prescribed, fentanyl can be misused or abused. A tolerance to the drug or dependence on it can develop quickly. If you think you are at risk of experiencing withdrawal symptoms, it is important to contact your doctor before quitting fentanyl cold turkey or attempting to detox from the drug on your own.

A doctor may recommend a plan to taper off fentanyl. A tapering plan can help mitigate withdrawal symptoms and decrease the chances of relapse. A doctor can switch an individual to another opioid, like morphine or methadone, then reduce the dosage each day. The exact schedule and method of tapering will depend on the individual needs of the patient.

Does methadone work for fentanyl withdrawal?

Methadone may be used to treat fentanyl withdrawal as a replacement opioid. Methadone is sometimes incorporated into the detox process to reduce withdrawal symptoms and block the euphoric high created by addictive opioids. A doctor may use methadone as part of a medically-supervised detox program or a tapering plan.

Does suboxone help with fentanyl withdrawal?