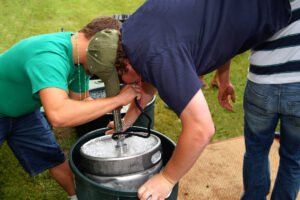 College is supposed to be one of the best times of a student’s life. It is a time to learn, explore, be independent, and try new things. Regrettably, one of the things that college students try is drugs and alcohol. This exploration leaves this group vulnerable to drug and alcohol issues. In addition to testing new boundaries, other issues arise in college students which can trigger additional substance abuse problems.

What Can Trigger Alcohol & Other Addiction Issues In College Students?

Why are drug and alcohol issues more prevalent amongst college-aged people? Here are a few reasons:

For many students, college is the first time they are without parental supervision. Being on their own for the first time can trigger anxiety in these students. Alcohol and drugs become a way that these students cope. Turning to activities like drinking or drugs can lower inhibitions and also make socializing easier.

Another reason students turn to alcohol and drugs during college is peer pressure. College is a mixing pot of experiences. Some college students were not exposed to substances of any kind during their high school years. But they don’t want to be ostracized for abstaining, so they start using to blend in with their peers.

Stress is also a trigger for many college students. As mentioned earlier, this is the first time many students have been away from home. For the first time, they are the ones in charge of managing their own lives. Once in college, some students may realize that their course load is too much, they lack the motivation to do their work, they don’t enjoy their classes, they are homesick, etc. Any one of these could lead to a student taking alcohol or drugs to cope with their stress levels.

Which Substances Are Most Popular With College Students?

Alcohol is quite popular with the college crowd. It is easy to find and purchase, plus using alcohol is acceptable in most social circles. Alcohol can also be inexpensive, which is ideal for college students. These factors all contribute to its popularity.

Another drug of choice with college-aged individuals is Adderall, or any drug falling into this category. Adderall and Ritalin are both drugs used to treat ADHD. Both are in the same drug class as amphetamines. These drugs speed up your brain, which helps people with ADHD concentrate and function.

If you don’t have ADHD, the drug will keep you wired and wide awake, which is ideal for college students who need to stay up for long stretches to work or study. Since ADHD is common in this age group, it is easy for other students to purchase drugs belonging to someone else. Amphetamines are highly addictive, and abuse of these drugs can lead to dependence. Taking ADHD drugs is widely viewed as acceptable since so many people take it legally with a prescription.

Marijuana has been popular with college students going back decades. However, on some college campuses, it is more popular than alcohol or any other drug. It is suspected that this is due, in part, to legalization and/or decriminalization efforts in many states. Marijuana is also very easy to find, inexpensive, and socially acceptable in most peer groups.

There are many other kinds of drugs that are used on a college campus. Drugs like LSD, ecstasy, psychedelic mushrooms, and many more are abused by college students. However, these don’t seem to be as popular or viewed as a recreational drug.

Cocaine is also found on college campuses, but rates of use are lower than many other categories of drugs. Abuse of legally prescribed drugs like benzodiazepines is also an issue.

According to the website AddictionCenter.com, 49% of college students drink or use drugs (both prescription and illicit). This stat does not mean that 49% have addiction issues, only that this percentage uses these substances.

Substance abuse can have a negative impact on anyone’s life. But the effects can be more pronounced in the life of a college student. Issues with alcohol and drugs can lead to the student making poor life choices. In some instances, those poor choices can contribute to other bad situations.

Students who have been drinking are more likely to be sexually assaulted. Being the victim of such a crime can have life-altering consequences. A person abusing alcohol is also susceptible to accepting drinks from strangers or drinking from communal bowls of alcohol. That communal source could be tainted with drugs like Rohypnol or GHB.

Students who abuse drugs and alcohol are more likely to lose sight of their priorities. These students may begin to skip class and neglect completing their schoolwork. They can spend their time focusing on drinking and not their education. This lack of focus can result in the student flunking out of college.

The Connection Between Mental Health Issues And Substance Abuse Issues

As stated earlier, college is a stressful time and many students confront things they have never dealt with before. Another thing that can appear in college students is mental health issues. While some disorders are obvious at a young age, many illnesses don’t have their onset until a person is in their late teens-early to mid-twenties. The average onset for mental illness is 20. This means that a person who will be diagnosed with a mental illness is quite likely to also be a college student.

Mental health issues become one more thing the student must confront. However, not all students will know what is happening to them or have family and friends that can steer them into treatment or counseling. This lack of support can leave a student to self-medicate with drugs and alcohol to handle their disorder. The result ends up being a person with a mental illness who has also developed a substance abuse problem or an addiction.

It can be a struggle to get anyone to seek treatment for alcohol and drug issues. It is even more of a challenge for a person in college. Even if the student recognizes that their problems are spiraling out of control, they may want to finish their education and honor that commitment first. Denial is also strong with this demographic. Partying and binge drinking comes with the territory in college. Many will write off their behavior as normal for someone their age. They don’t yet understand that missing deadlines and assignments because of substance use is not college behavior and it will continue after graduation.

If the student’s family and friends can get through to him or her, treatment has produced excellent results in this age bracket. Based on the severity of their problem, a student can pick from inpatient, outpatient, or a combination of treatment styles.

Alcohol and addiction issues are more prevalent than one would think in the college population. Risk-taking behaviors, peer pressure, and even the onset of mental illness are all contributing factors in this demographic. Treatments options are very successful in this group but getting a college student into a program poses a challenge.