Home » Stories of Recovery » How I Got Sober: A Story of Recovery from Drugs & Alcohol by Wallace R. 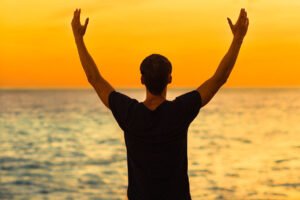 Anonymously written by Wallace R. about his road to recovery from drug & alcohol addiction. Published by Mark Perlman.

Addiction is never just one thing.

It’s not just the positive presence of a problem, but also the negative absence of some human necessities.

A lack of security.

A lack of self-esteem.

A lack of dignity.

If we are happy in ourselves and with our place in the world and before others, addiction can be less of a temptation.

But it we’re not on solid ground, addiction can be truly devastating…

So like all sobering stories, let’s go back to the beginning!

I grew up during the Troubles, in Northern Ireland.

Some of my earliest memories are a constant deluge of disturbing news on the TV.

So consumed was my consciousness with this conflict in my early years, that often enough, when watching newsreaders on the television, I was scared that a terrorist might burst in and start shooting them…

Irish Republican and Ulster Loyalist terrorists, of course, were known for their unpredictability.

Another early memory of mine, which is more of a general ‘archetype’ or ‘model’ than any specific instance, is when there were emergency checks run by the army, which occurred whenever there was suspicion a terrorist attack was about to occur.

While it’s hard to blame the authorities for doing whatever was needed to keep people safe, and true blame lies with the terrorist organizations, it was certainly very frightening for a young child to have the family car stopped by armed soldiers, asking who we were and where we were going.

This was something they had to do for every car passing by at certain sporadic ‘bottleneck moments’ of terror threats, but as a very young child, you don’t really quite grasp the logic of the situation.

I had a very pronounced fear that I might accidentally provoke or be perceived as provoking a soldier, and that in doing so, I might get shot by one of the terrifying guns the soldiers were carrying.

I’m sure the soldiers didn’t enjoy it either.

But this was the way the country was.

It was a very frightening time for everyone, no matter who they were; and for children, there was perhaps a very special pain.

I’ve always been a fear-based person…

But I believe that can change, however long it takes.

Fear was also in the various religious circles in which I moved; or at least some of them.

Not just a question of ideas, but of style, of tone, of aesthetic.

And in matters of faith, that is no less important than all the rest.

Fear in the family, too.

Corporal punishment was the norm.

In childhood, the wooden spoon.

In my teenage years, blows to the head.

Physical punishments (or ‘chastisements’ as the parent in question called them, ironically a rather huge fan of Isaiah 53) were painful on both a physical and psychological level.

But the trepidation, the constant fear and trembling of that Sword of Damocles, was probably worse.

Add to that the devastating impact of sleep disturbances and severe digestive problems, partly incited by religious terrors that (for fairly obvious reasons) I could not disclose to anyone around  me…

Yes, it was all pretty brutal.

I left home around the age of 18 or so, and ever since then, I’ve been living in England.

The first several years were to some degree stable, but I had internalized and repressed a lot of my problems.

In my mid-twenties, I fell in love.

I started drinking heavily with my girlfriend.

That was how the slippery slope started; but that’s my fault, of course, rather than hers. It was my responsibility to keep strong in terms of self-discipline, not least because I had been on various different mental-health medications since primary school.

Things got difficult: I got increasingly disputatious with her over time, while she seemed to find some aspects of me hard to understand, if not incomprehensible, which unsurprisingly bred some real mutual resentment.

By the time we broke up, I had already ‘cold turkeyed’ on two very powerful psychiatric medications; so it’s no surprise our breach was deeply, deeply acrimonious.

Over time, with getting re-medicated and getting excellent therapy from a really wonderful psychiatrist, I was finally on the mend…

But sooner or later, disaster struck!

My mother was diagnosed with cancer.

And eventually, the news came I was to go home to Northern Ireland, to attend her on her deathbed.

There’s so much I could write about this…

It was a kind of reconciliation, but one of the worst possible kind, it seems to me.

Eventually, I had to trudge my way back home to England.

At least in the short term.

In the long run, they undoubtedly made it worse.

The mood swings were severe.

Those who reached out to me came to regret it.

The broken relationships patterns of my childhood returned with a vengeance, to be re-enacted in real life, taking on hideously concrete and inescapable brute materiality; no longer confined to the mysticke, whimsical faerieland of the Ulster-Scots, if they ever were, or ever could be.

I also turned to pornography as well.

And on top of that, I spent half my life bitterly ranting on social media, along with a whirlwind of blogging.

My writing was wildly inconsistent, verging from beautiful poetry and tear-jerking fiction to utterly unhinged, tabloid-style philippics on the woes of the world.

The civil war within in me continually erupted higher, harder and hotter into a total war against the world outside.

Eventually, I couldn’t bear it any more, and decided to quit.

I made more than one attempt.

Eventually, with the help of CBD oil, I managed to quit completely.

However, by this point, I was a wreck, and tried to get re-medicated; I’ve only ever found CBD oil a temporary expedient.

Something for times of crisis.

These days, I never use supplements (such as CBD oil) or medication at all.

But back then, it was helpful.

Alcohol addiction had been very destructive to my studies, to my professional life, to my relationships and my vision of myself, of others and of the world.

But the post-recovery period has been hard as well.

Yet more than a year since quitting, I’m finally building momentum.

I’ve managed to quit social media with 100% success, while the pornography is overwhelmingly gone (I slip very occasionally, but I am more than determined to win this battle).

I’ve been using careful dietary modifications to keep my serotonin levels in check by non-pharmaceutical means, while avoiding my compulsive and repetitive behaviors of the past: even workaholism!

I also give myself some music therapy as well.

What sustained me through this time?

Firstly, the unconditional love and care of others.

Secondly, re-engaging with faith in a healthier manner than so much of what I was involved in growing up.

Music therapy sometimes takes a sacred form. I pray a little these days too.

Thirdly, I still have a vision not only for myself, but for the world as well.

Sadly, iron resolution means very little, without discipline; maybe not iron discipline, but something strong enough to hold us together, but not so heavy as to drag us down below the waves.

When self-compassion begins to truly take root in us, with flowering after flowering, we are also more patient with the failings of others; be they real, or really just imagined!

I am reminded here of the words of the Quaker, George Fox:

And of the great Persian Sufi poet, Jalaluddin al-Rumi:

Out beyond ideas of wrongdoing and rightdoing,
There is a field. I’ll meet you there.
When the soul lies down in that grass,
The world is too full to talk about.

May all our memories be blessed!