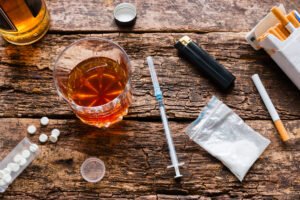 Society tends to treat alcohol and drugs as separate categories, the starkest difference being the issue of legality. Alcohol is generally treated as a more acceptable substance, while the vast majority of drugs (with marijuana being a very partial and recent exception) are stigmatized. The legality of alcohol has contributed to it becoming by far the most common addiction in the United States.

The difference in social attitudes can make a significant difference in the trajectory of recovery. A heroin addict may experience rejection by society, while the alcoholic may enjoy support or at least lower levels of stigma. These dynamics mean that a hard drug user is more likely to experience devastating social consequences as a result of their maladies, such as losing careers or families. All these elements put together, mean that a drug addict (especially one dependent on “hard drugs”), may face a more difficult road to recovery than an alcoholic with a comparably severe habit.

On the other hand, the lesser social stigma associated with alcoholism may facilitate continued drinking. An alcoholic may abuse drink for years without realizing the severity of the problem. Humans are social creatures and tend to evaluate the severity of their problems by the reaction of those around them. It is often efforts by important individuals in the lives of addicts to confront the addict, which serves as the catalyst. Alcoholics are more likely to be met with friendly jokes on their overuse than with severe consequences for their addiction. This frequently leads to alcoholics to underrate the severity of their problems. Meanwhile, a heroin user will face serious objections from just about all family members and employers. This means that drug users are more likely to enter the process of recovery early.

The stark social differentiation between alcohol and drugs flies in the face of the facts. According to a 2010 study overseen by the Drugs Science advisory committee, alcohol is easily the most harmful of the substances amongst those analyzed. The assessment focused on two metrics: harm to users and the consequences for society. Alcohol rated high in terms of damage to users, but it was rated as the most disruptive to society at large. Meanwhile, some of the more stigmatized drugs rated higher in terms of personal damage but we’re determined to significantly less damaging to society.

Some illegal substances, such as LSD and mushrooms were deemed to cause little damage to users and virtually no damage to society. The study determined that when both metrics are taken into account, alcohol is easily the most damaging substance of all those considered.

In terms of the physical damage caused through repeated use, heroin and cocaine prove to be significantly more damaging than alcohol. The ailments caused by each drug are different as well. Heavy drug users may face consequences such as overdoses leading to death, organ failures as a result of accumulated toxicity, and getting diseased such as HIV through shared needles. Meanwhile, alcohol addiction is more likely to lead to high blood pressure, ulcers, hepatitis, and liver damage. However, all three can lead to severe consequences and even death.

What’s the reason for the differentiation?

It is worth remembering that the line between the two forms of addiction was drawn for social rather than scientific reasons. If efforts to perpetuate the prohibition of alcohol in 1933 had succeeded, alcohol would be classified as a drug as well.

Ultimately, all forms of addiction stem from the same source: an overwhelming need to dull either physical or emotional pain. The addict is ultimately likely to experience similar consequences no matter the type of substance they are addicted to. All can experience identically severe social consequences such as job loss and family dissolution. The physical maladies arising from addiction may be somewhat different. However, the result from the perspective of the addict’s damaged body is the same.

It is important to remember that the “drug” category is highly diverse. It includes organic and synthetic substances, causing wildly different reactions amongst those partaking. Substances running the gamut from marijuana, painkillers, cocaine, heroin, benzodiazepines, stimulants, inhalants, and sleeping pills do not have very much in common. The experience of getting “high” can vary wildly from generating unnatural energy to fostering complete calm or apathy. Significant differences can also manifest in terms of the difficulty and consequences of withdrawal.

In sum, addictions share far more similarities than differences. Rather than illuminating genuine differences, the social stigma exaggerates them and thereby renders recovery more difficult to achieve. It is more accurate and useful to think of drug and alcohol addiction as facets of the same malady.