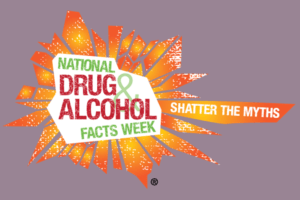 Educational initiative that links teens to facts about drugs and alcohol

The National Drug and Alcohol Facts Week (NDAFW) commemorates their 10th anniversary  from March 30 through April 5, 2020 on educating teens about substance use and addiction. NDAFW was created by the National Institute on Drug Abuse (NIDA) and the National Institute on Alcohol Abuse and Alcoholism (NIAAA) in 2010. NDAFW strives to better prepare and educate teens to make good decisions, and be aware of the risks alcohol and drug use poses to their health.

NDAFW is an opportunity for teens, scientists, and other experts to discuss science-based facts on the effects of drugs on the brain, body, and behavior. Experts help educate teens on counteracting the myths about drugs and alcohol that they may get from the internet, social media, TV, movies, music, or from friends. Due to COVID-19 restrictions, NDAFW events have been moved to virtual learning and online activities across the country. Despite these challenges, NDAFW is continuing to grow and reached 2,000 events in all 50 states and 20 countries in 2019.

NDAFW offers countless activities that allow for virtual participation. Below are some examples:

NIDA encourages students and organizations to participate in their Twitter storm to raise awareness for NDAFW on Monday, March 30, from 3 to 4 p.m. EDT. The goal is to spread awareness about drug and alcohol education using the hashtag #NDAFW. Following this, on April 3rd at 3p.m., NIDA will host a Twitter Trivia Challenge in collaboration with Students Against Destructive Decisions (SADD) to test teens’ knowledge of drugs and alcohol.

NDAFW is an annual observance created in 2010 by scientists at NIDA to educate teens on drugs and addiction based on scientific evidence. In 2016, the NIAAA became a partner, and alcohol was added as a topic of discussion. NIDA is the lead federal agency supporting drug use and addiction research and applying that to improve public health. NIAAA supports and conducts research on the impacts of alcohol use on human health and well-being. NIDA and NIAAA are both part of the National Institutes of Health, the primary federal agency that conducts medical research and investigates the causes, treatments, and cures for diseases.

NIDA and NIAAA work with many federal, state, and local partners to run educational programs  for teens on drugs and alcohol. Partners include the Substance Abuse and Mental Health Services Administration, the White House Office of National Drug Control Policy, the Office of Safe and Healthy Students in the U.S. Department of Education and the Drug Enforcement Administration in the U.S. Department of Justice.

For more information on where to learn about upcoming events or on how to get more involved: