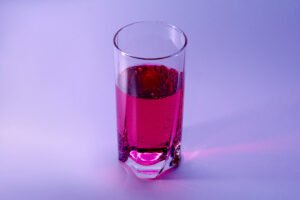 Traditional vices include drinking alcohol and smoking an illicit substance, such as weed. We consume these substances to feel a reprieve from our day-to-day issues, to relax, or just to increase our ability to have a great time. Even though they hurt our bodies, instead of stopping, we typically increase our usage, because let’s face it, the more we do it, the more we want it.

What is “Purple Drank”?

“Purple Drank”, or lean, is a dangerous cocktail that blends prescription cough syrup, soda, and hard candy together in an attempt to obtain a high. The name “Purple Drank” comes from the color of the most commonly used cough syrup, promethazine. The cold medication typically contains codeine as well.

Simply put, users combine these easy to grab ingredients into a substance that gives a high similar to opioids. Jolly ranchers, which stay on the tongue for an extended period of time, are the candy of choice. The most common sodas used are Sprite, Mountain Dew, and grape Fanta.

“Purple Drank” Effects and Side Effects

“Purple drank” gives a wide range of effects. Codeine, one main ingredient in the concoction is an opiate similar to heroin, morphine, and Vicodin, which create a feeling of euphoria or a high. Codeine produces relaxation and euphoria when consumed in sufficient quantities. Promethazine is an antihistamine that acts as a sedative, which also creates a feeling of relaxation.

Over-the-counter cough syrups containing dextromethorphan can also cause hallucinations and out-of-body experiences. The name Lean, a “Purple Drank” alias, comes from the effect of slumping over, or leaning onto a wall or object when intoxicated. In high doses, users can lose complete control over their body and limbs.

While users may feel euphoria from consuming large amounts of “purple drank”, there are a number of negative side effects that accompany the concoction.

Quitting the use of “purple drank” can be uncomfortable, but not deadly. If someone stops taking the substance, they may experience symptoms of withdrawal, similar to withdrawal symptoms caused by ceasing other illicit substances.

“Purple Drank” Abuse Statistics in the US

“Purple Drank” is popular in the rap community and southern United States. Famous hip-hop artists, such as Lil Wayne, and DJ Screw and MAC Miller, who both died from an overdose, popularized the drink and continued to abuse it despite negative symptoms and publicity. It is unclear how many people abuse cough syrup in the form of “purple drank”, but one report revealed that 2.8% of 8th graders, 3.3% of 10th graders, and 3.4% of 12th graders have used some form of cough syrup to get high.

In 2014, it was reported that one in 10 teens abused cough syrup to get high and another study reported that 3 million teens and young adults between the ages of 12 and 25 had used cold medicines to get high. Studies are still being conducted on the use of “purple drank”.

Overuse of the individual ingredients used to make “Purple Drank”, can lead to serious neuropsychological complications alone, and even more harsh reactions when combined.

Increasing use leads to addiction and the impulse to combine other illicit substances such as alcohol and opioids to maintain a high.

Due to the variation in ingredients, scientists have not been able to determine how much of “purple drank” contributes to death. Codeine, promethazine and depressants all have significant life altering side effects and should not be mixed to make any form of “purple drank” or other concoction.

“Purple drank” is an illicit drug that often flies under the radar. Loved ones could be consuming right in front of us and we may not know. It may not cause irritability and erratic behaviors like many other substances, but it is still just as dangerous. Our vices our comfort zones for us, but they should not become a license to kill ourselves.

The government has done what it can to minimize abuse of “purple drank” by requiring identification for the purchase of all cough syrups and limiting the prevalence of codeine cough syrup prescribed by doctors. So, though that warning label may mean nothing to you, and being asked for your ID at the check-out counter may annoy you, remember that this control is helping to keep another kid or young adult from potentially mixing a concoction that could take their life. Instead of judging or rolling your eyes, find out what you can do to spread knowledge of this subtle and risky substance.

If you or someone you know does struggle with addiction to “purple drank” or another substance, you can seek help at a local addiction clinic or contact the Substance Abuse and Mental Health Services Administration (SAMHSA) National Helpline at 1-800-662-4357.

Purple drank is not safe. It increases the chance of heart and lung failure, seizures, and can even lead to death.

What is purple drank made of?

Purple drank is commonly made of cough syrup, soda, and sweet candy. Cough syrup may be prescription strength containing codeine or promethazine or it may be an over-the-counter brand such as Robitussin.

How long do the effects of purple drank last?

Effects of Purple drank last between three to six hours.

How much does purple drank cost?

The cost is fairly cheap, as the ingredients can be purchased over the counter from a local drug store for less than $20. The prescription cough syrup is typically covered by medical insurance.

How long does purple drank stay in your system?

The length of time that purple drank stays in your system, varies depending on the ingredients used. Some studies show the following:

Can purple drank kill you?

Yes, purple drank can kill you. It can lead to respiratory failure, which can cause users to stop breathing. Purple drank also increases the likelihood of seizures in those who are already high risk.

Does purple drank get you high?

Yes, purple drank can get you high. The codeine causes a euphoric feeling and the mixture of cough syrup with substances such as alcohol can produce an out-of-body experience. Purple drank can also cause hallucinations and extreme relaxation.

Yes, purple drank has been classified as an illicit substance, which is why cough syrups and codeine products are heavily regulated. Users found in position of or distributing purple drank can be arrested.

How can I tell if someone is intoxicated by purple drank?

Can someone get help with an addiction to purple drank?

“Lean Back: The Dangers of Drinking Lean.” BlackDoctor.org, Accessed February 5, 2018.

Purple Drank: Everything You’ve Been Afraid to Ask. www.verywellmind.com.