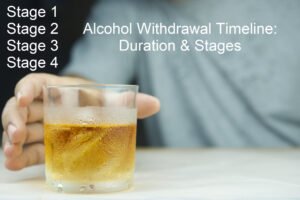 One of the symptoms of an alcohol use disorder is the development of alcohol dependence. This means that the body adapts to the presence of alcohol and cannot function normally without it. As researchers writing for a 2015 publication of the journal Drugs have explained, when someone who is dependent upon alcohol suddenly stops drinking, the nervous system becomes out of balance. This creates uncomfortable withdrawal symptoms, which can occur in various stages and levels of severity.

This stage begins 6 to 12 hours after a person stops drinking and includes the following symptoms, which are generally considered to be rather minor:

For some people, alcohol withdrawal may stop at this stage and pass within a week. If withdrawal symptoms are mild, people can typically manage them on their own without formal treatment, but it is helpful to consult with a professional to be sure.

While some individuals who are dependent upon alcohol will experience only mild withdrawal symptoms, others will progress to hallucinations, which represent the second stage of alcohol withdrawal. These hallucinations occur in about 25 percent of people who undergo alcohol withdrawal, and they can be visual, tactile, or auditory in nature, according to the authors of the report in Drugs. Hallucinations begin about a day after the last drink, and while symptoms may make people feel paranoid or agitated, they will generally recognize that hallucinations are not real.

As the experts writing for Drugs have explained, delirium tremens is the final and worst stage of alcohol withdrawal, and it may represent a worsening of seizures. Delirium tremens is a serious and potentially life-threatening condition that occurs in about 5 percent of people who suffer from alcohol withdrawal. It typically begins two to three days after a person stops drinking, but it can take as long as 10 days for symptoms to appear. Delirium tremens typically lasts five to seven days, and it leads to death in up to five percent of people.

Typical symptoms of delirium tremens are as follows:

A person suffering from delirium tremens will display a sudden change in consciousness and mental functioning and may appear very agitated or anxious. It is also common for the above symptoms to be accompanied by sweating, tremor, and nausea. Complications of delirium tremens include heart attack and aspiration pneumonia, which is why this condition is so deadly.

Given the fact that this condition can be life-threatening, it is critical that people who show symptoms of seizures or delirium tremens seek medical treatment immediately. Doctors will often use benzodiazepine drugs to treat severe alcohol withdrawal, such as that which occurs in cases of seizures of delirium tremens.

While the above stages represent the immediate effects of alcohol withdrawal, there is another stage called protracted withdrawal. According to the Semel Institute for Neuroscience and Human Behavior, this is a prolonged form of withdrawal that can persist for weeks or even months after a person stops drinking. Symptoms include alcohol cravings, sleep disturbances, depression, memory problems, irritability, and difficulty coping with stress.

To address protracted alcohol withdrawal, it is important that patients receive ongoing addiction treatment after they detox from alcohol. Treatments involving counseling can not only help people to cope with protracted withdrawal symptoms but can also assist with addressing the underlying issues, such as mental health problems or history of trauma, that led to alcohol abuse. Support groups like Alcoholics Anonymous can also be an important part of recovery.

Alcohol withdrawal can involve various stages, beginning with a more mild withdrawal syndrome and progressing to severe forms of withdrawal, such as seizures and delirium tremens. While only a minority of patients will suffer from the most severe alcohol withdrawal symptoms, it is important to receive professional help when giving up alcohol. Even if withdrawal is mild, it is important to work with an addiction professional or medical provider to ensure that you remain as safe during withdrawal. A professional can help you to stay as safe and comfortable as possible during the detox process. After you make it through initial withdrawal, ongoing psychological treatment can help you to remain sober from alcohol.